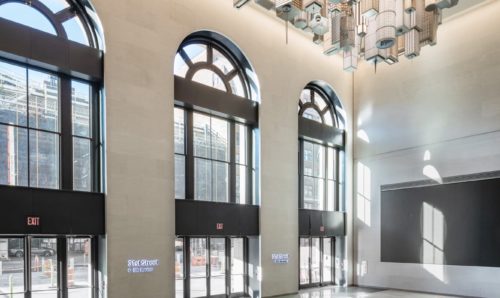 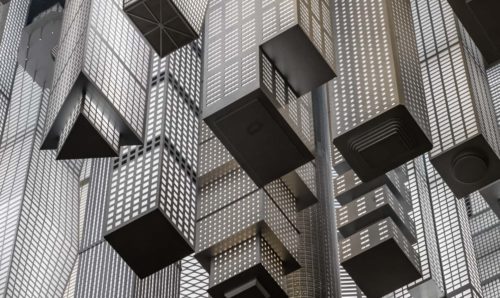 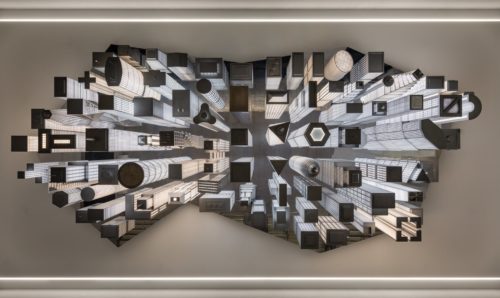 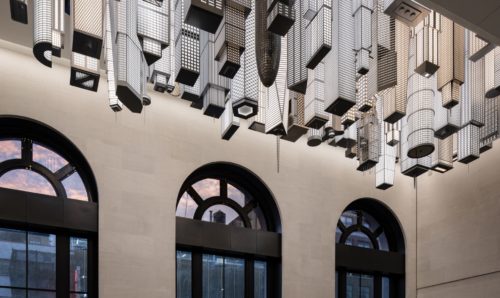 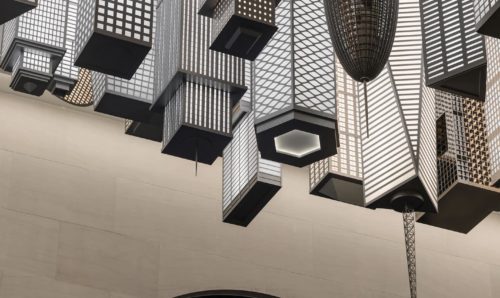 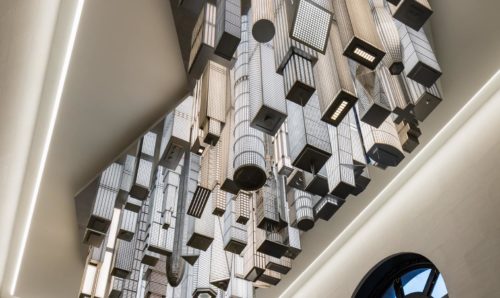 Suspended from the ceiling of the 31st Street Mid-block Entrance Hall, The Hive is a 1:100 scaled architectural model that offers a surreal and fantastical vision of a global metropolis. Dozens of illuminated high-rise buildings descend toward visitors, their downturned orientation inviting new and varied perspectives as visitors move around the space. Artist duo Elmgreen & Dragset has combined miniaturized skyscrapers of their own invention with iconic high-rise buildings from megacities around the world, distilling these towers into their most essential forms. This fictional city combines landmarks from Chicago, Hong Kong, Kuala Lumpur, London, and Paris as well as iconic New York City silhouettes.

Titling the work The Hive, the artists suggest a link between natural and human-built structures, like the complex and evolving architecture of a beehive. They have also compared the ceiling-mounted buildings to luminous stalactites that pay tribute to the highly developed cities we live in today while reminding us of our cave-dweller origins. Familiar yet foreign, this uncanny, hybridized representation of an urban center highlights the globalization of architectural design and evokes the influence and interconnectedness of the world’s great cities. Like an inverted reflection of the cityscape just beyond the Train Hall doors, The Hive expresses the quintessential idea of New York City as a melting pot where cultures, nationalities, and ethnicities coexist to become greater than the sum of their parts.

Since 1995, the artistic duo Elmgreen & Dragset have created sculptures and installations that encourage novel perspectives on the structures and systems that govern our lives. Their works transpose and relocate everyday objects into unexpected arrangements and settings, often with subversive humor. Through recontextualizations of the familiar, the artists transform the quotidian fixtures of our lived environment—ATM machines, sewage pipes, suburban swimming pools—inviting new narratives and activating associations with broader societal tensions. Elmgreen & Dragset’s strategy of displacement fundamentally shifts our perception of our surroundings and often resists notions of conformity within our built and socio-cultural environments. In keeping with their practice and in visual dialogue with the artists’ works Magic Mushrooms (2015) and City In The Sky (2019), The Hive allows us a surprising perceptual and spatial relationship to a familiar view, the city skyline. The looming stature of the inverted skyscrapers is at once overpowering and enthralling. It evokes the magnetic draw of cities and the continual urbanization of our world. With buildings up to 9’ tall and integrating over .8 miles (1.3km) of LED strip, this is one of their most technically complex installations. The Hive is the artists’ first permanent public sculpture in New York.

Stay up to date about Moynihan Train Hall 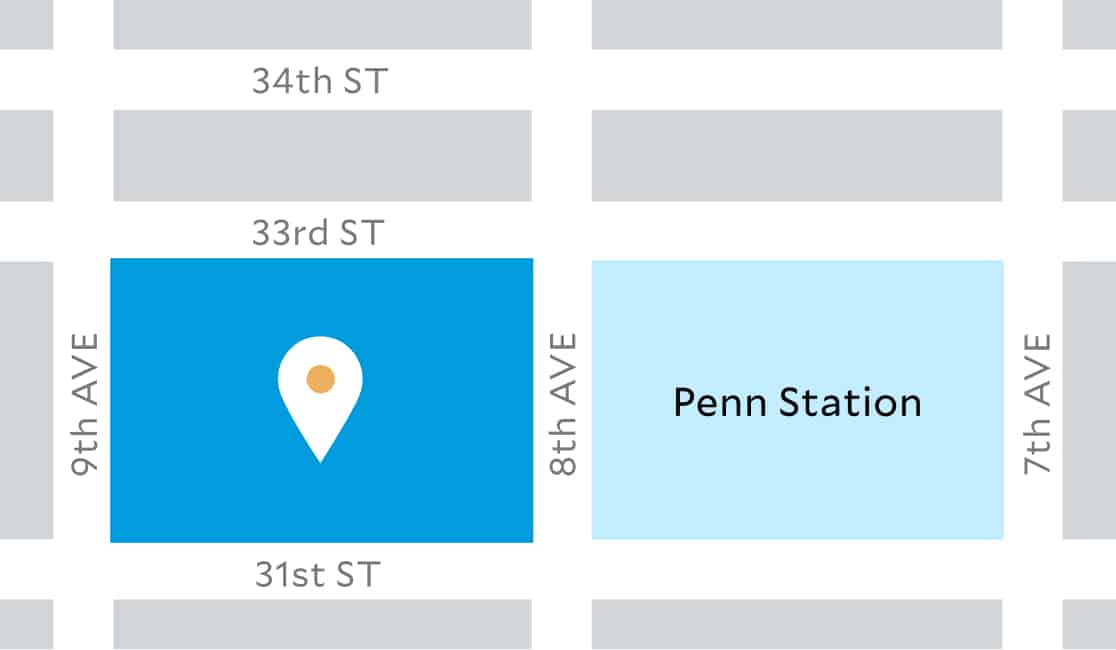 Moynihan Train Hall is open to the public daily from 5:00AM to 1:00AM.

Note: Amtrak and LIRR services at Penn Station should be used from 1:00AM to 5:00AM.